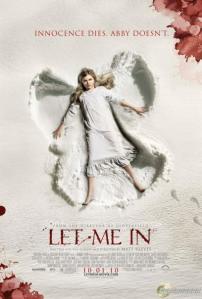 Synopsis:
Owen is 12 years-old, his parents are no longer together and he has no friends. He’s also being bullied at school and lives a dreary existence. Late one night he meets Abby, also 12, who has moved in next door. She doesn’t say much about herself and doesn’t go to school. Meanwhile, a detective is investigating a series of murders where people have been drained of their blood. Owen and Abby are lonely souls who find comfort in one another and Abby gives him the strength to face his tormentors. Abby has secrets as well that touch directly on the police investigation.

What I thought of it:
With this being a vampire movie and rated a 15 in the UK, I was surprised at how gentle this film was overall. Yes, there is some blood (you’d expect that, wouldn’t you?) and some violence (you’d expect that too), but there’s nothing terribly graphic and the main story focuses on the burgeoning friendship between a twelve-year-old boy and the seemingly similarly aged girl next door. It shows how a strong friendship can give a person the strength to overcome so many things, in this case the main contender is bullying, but there is also a pressing family situation which needs to be dealt with, not just for Owen, but for Abby too.

The two young leads give very subtle and moving performances which show promise of great things to come (they’re certainly both very busy with upcoming movies at the moment!) and their relationship is both touching and tentatively played.

There are some slightly uncomfortable moments – the relationship between Abby and her “father” verges on the sexual with some of the caresses – but there is nothing overt and it is made very clear to the viewer who is in charge in their relationship.

I enjoyed it. The idea of child vampires isn’t new (see 1994’s Interview with the Vampire for one notable example), but it’s played to great effect here and we look directly at how a doomed relationship between a vampire and human has to end – with the human always aging and their vampire friend forever young.